With its neon colour palette, wistful soundtrack and visions of kitsch Americana, Ponyboi feels like a halcyon dream. 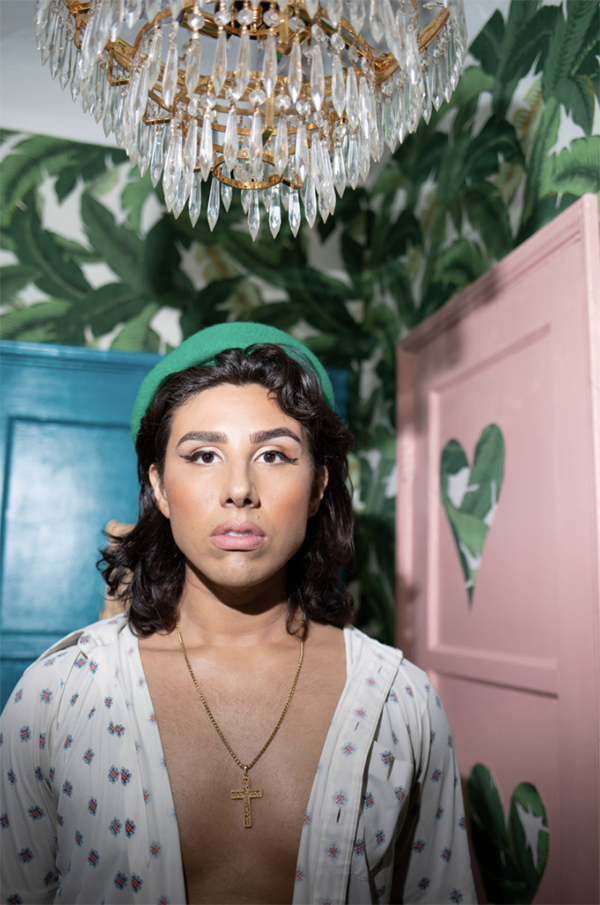 The nostalgic aesthetic belies the grit of the life of the titular character: a Latinx, intersex sex/laundromat worker from New Jersey. It’s a stylish and accomplished short but what transcends the artistic merit of Ponyboi, is that it’s the first narrative intersex film created by, and starring, an out intersex person.

Sissy Screens Editor Tali Polichtuk spoke to writer, co-director and star River Gallo about the origins of the film, the ‘queer miracle’ of Stephen Fry’s involvement in the project and the importance of promoting intersex visibility and awareness.

Q: How was Ponyboi conceived?
A: The film was my thesis film for graduate school at USC in LA, but the origin of the film dates back to when I was studying acting and experimental theatre in New York at NYU. I developed a character who was a sex worker and a runaway. At the time I didn’t know I was intersex, but I made him a queer person. And then I couldn’t shake off the story. Five years later when I was in grad school I found a need to bring more of my personal life into it.

It was through that need to connect to it on a more personal level that I started researching the condition that I was born with, which is called anorchia, meaning that my testicles were absent at birth. And in the process of research and finding out what new information there was about it, I discovered the word ‘intersex’ and that I am intersex.

And so the journey of the film took on a deeper level of a character who is trying to come to terms with some of the shame and trauma that he experienced growing up being intersex, and not accepted, and how that manifested into a lack of self-worth and finding himself in a situation in life where he wasn’t really giving himself that kind of love and support to achieve his dreams. He’s trapped in this toxic environment. That was the inspiration.

And also growing up in New Jersey. Often people in suburbs that are close to big cities have this feeling of being close to a culture where they might be more accepted, but really they’re still so far removed from it. I wanted to tap into that feeling.

“Gender is such a significant part of who we are and to have that be controlled by external forces is such a crime.”

Q: Given there’s little representation of intersex people in popular culture, did you feel pressure in creating this character?
A: Yes, definitely. I felt a ton of pressure because first of all finding this out about myself and my body and this word that encompasses an identity and a community—it happened at the same time as, ‘Oh, this is the first narrative film that’s doing this’, and also [coincided with] me coming to terms with how I felt about it and how I felt telling people that I was intersex.

But then my co-director Sadé Clacken Joseph and my producer Seven Graham, who is also intersex, really inspired me to be bold and take up that space. I think a lot the trauma that intersex people experience is because there’s been so little visibility forever, and even now it’s not enough. It’s so easy to hide in the shadows and feel like our stories are not worth it. But for me, I felt like I had this duty to this community to show that we can be brave and put our stories out there in a narrative format that uses the poetics of filmmaking to convey our experiences.

Q: There’s so much more to Ponyboi beyond his gender identity. As you mentioned, he’s from New Jersey, he’s Latinx, he’s a sex worker. Was it important to show these facets of his character?
A: I felt that my purpose as an artist is to create confessional, personal narrative that really comes from my own experience. This is my first major film project, so I wanted to put all my chips in—this is my entire me, this is bringing my Latinx background, my intersex background. I wanted it to exude me as much as possible.

I think people watch the film and they really understand my sensibility as an artist but also who I am as a person. It turned out to be not just a work of art that I’m really proud of but a great calling card that’s had so much attention from the industry. And I feel like it’s the perfect step forward for my career as a filmmaker and as an artist. It’s really exciting to me that including those parts of myself, that I generally don’t speak about, has been advantageous for my career.

Q: The flashback sequences in the film give you a glimpse into Ponyboi’s experience with the medical community. Was it important for you to show how the character was mistreated and pathologised by that community?
A: I think that minute of those few scenes really amplifies the atmosphere and the rawness of what that experience is like, to feel like your body is not yours. That as an intersex person, your parents and your doctors have control over what you’re going to look like and who you’re going to be and your entire sense of self. Gender is such a significant part of who we are and to have that be controlled by external forces, that don’t let you have your say or your opinion, is such a crime. It was so necessary for me to express that in the film.

Despite how small that part is, it really becomes the heart of the film. It all culminates in that moment where you are like, ‘Oh my god, I get that. I get what it feels to be like a kid who feels powerless’.

Q: Some big name producers worked on the film. How did the likes of Stephen Fry and Emma Thompson come to be involved?
A: My Executive Producer Seven’s friend Ela Xora was holding a panel with Stephen Fry at the Royal College of Art on intersex deities in Roman and Greek mythology. Seven was going to Skype into that phone call and asked me to join in.

So I met Stephen via Skype. We had a talk about all the things that are happening in the intersex community now as well as the history of intersex people. I told him about Ponyboi and he was really interested. We had a meeting two weeks later and he loved the project so much that he came on board as an Executive Producer. Stephen reached out to a few friends for support and that’s when Emma Thompson expressed interest.

It was a little bit of a ‘queer miracle’ that we were able to connect with these British icons—their star power and influence helped us realise the power of our story. I felt like people wanted to be a part of not just the film itself, but an important moment in intersex history. It was wild—I still can’t believe it.

I had lunch with him [Stephen Fry] recently and we recapped on what a crazy year it has been. And now he’s really interested in the feature film version of Ponyboi, which I’m currently working on.

“I felt like I had this duty to this community to show that we can be brave and put our stories out there in a narrative format that uses the poetics of filmmaking to convey our experiences.”

Q: Tell us more about the feature.
A: I’m currently writing it and there are so many people who want to read it. As an artist, there’s a balance between the business side and wanting to strike while the iron’s hot, but art takes the time that it takes—if you want it to be good.

The feature is taking on a bit of a crime/drama element with a drug dealer/mafia situation, which is an interesting development from the short. When do you ever see queer people in car chases? It’s interesting because I never thought I’d write anything close to the action genre, following the presumption that it’s for ‘Hollywood men’ to write. But now I think I want to challenge myself and lean into that because I think the world of Ponyboi lends itself to that narrative of small-time crime.

Q: Are there any other projects you’re working on?
A: I’ve been making a lot of short film content with my production company GapToof Entertainment. We’ve been doing a lot of music videos for indie artists. I’m also auditioning for a few acting roles, but mostly I’m trying to get the feature done because I’ve realised that after people watch the film, people want so much more. The world needs the full thing. If that was the appetiser, I really want to give people the whole course.