"I regard my performance as ritualistic, kind of like a shamanic performance." 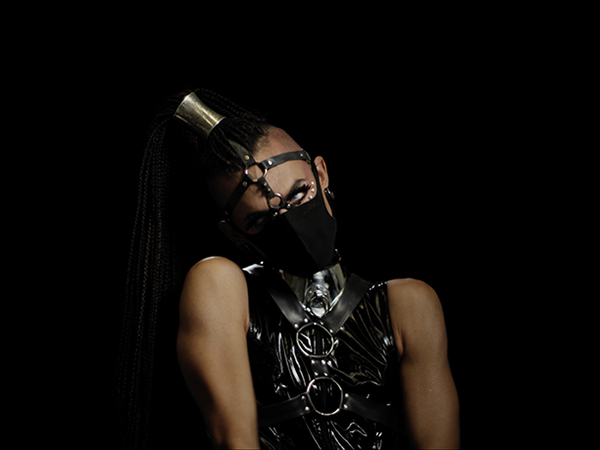 “In Hebrew, asis means nectar. Like something dripping from the fruit when you take a bite… And in English, you spell it A-s-i-s, as is. Which really connects, for me, to like it as is. When I eat fruit, I eat it as is; without cooking, without heating. And I want to accept reality as is. I want to accept myself for who I am and I want people to accept me for who I am. So my name is a sort of spell, an incantation to be as is and to be asis.”

Being in the presence of the Israeli artist, and long-time fruitarian, Asis D’Orange is an entrancing experience. It’s hard not to be bewitched by their boundless energy and presence, especially on the stage. “I regard my performance as ritualistic, kind of like a shamanic performance,” explains Asis during our interview on a sunny afternoon in the backyard of their friend’s share house a few months back.

“I want to stretch people’s boundaries, but not in a painful way.”

Asis was in Melbourne to perform a number of shows, including a headlining gig at the Festival of Jewish Arts & Music (FOJAM) at the Melbourne Recital Centre. The show is veritable worlds away from the living room performances they once staged at an Israeli eco-urban community when they first started to dabble in drag. That was six years ago and while they’ve graced grander stages since winning the inaugural drag competition at the 2017 Tel Aviv International LGBT Film Festival, they insist: “My perception of drag hasn’t changed that much—the core remains the same. It’s a radical self-expression of everything that I am.”

A few days earlier, they performed their show The Carrot to a mostly cis-het crowd at FOJAM. This would prove a daunting task for some drag artists but not Asis, who strives to connect with wider audiences. “I want to stretch people’s boundaries, but not in a painful way,” they assert. “I want it to be ‘Oh, okay we’re stretching here’, but not ‘Oy, yoy, yoy, this is too much’, because afterwards, people close up, and I don’t want people closing up. I want people to feel it.”

“It makes me mad that Israel takes its LGBTQIA+ community, a persecuted community, and uses it like a fig leaf to hide its occupation policies.”

Despite their work’s avant-garde aesthetic, Asis D’Orange’s art and activism revolve around a simple precept: respect and love for humanity and the planet. This extends beyond their ‘politics of nutrition’ to a conscious choice to only purchase pre-loved clothes—“it is possible to be a fashionista that wears secondhand”—and a past decision to travel by ship, rather than fly, from Israel to a gig in Portugal, to reduce their carbon footprint. However, their most bold political action was refusing to serve in the Israel Defence Forces: “I refused to enlist, because I didn’t want to confine myself and I didn’t want to confine other people.” This is a defiant action in a country where military conscription is mandatory for most, and Asis served jail time for “disobeying military commands”.

Their show Tainted Love grapples with the complex politics of their homeland. Dressed in military garb, Asis dance-strips to Marilyn Manson’s goth cover of the Soft Cell classic. As the show progresses, audiences cover them with pink paint that they salaciously wipe off using the Israeli flag. This act provides a potent commentary on pink washing, a term used to describe the deliberate appropriation of sexual liberation movements towards regressive political ends. Asis explains that in the context of Israel, “this ‘pink wash’ is used to show that being queer in Tel Aviv is a lot easier than it is to be queer in Syria, Jenin, Lebanon etcetera and is used to present Israel as an enlightened nation. And it’s not right because it’s not reality. It makes me mad that Israel takes its LGBTQIA+ community, a persecuted community, and uses it like a fig leaf to hide its occupation policies.”

Despite their firm beliefs, Asis doesn’t want their work to be prescriptive or didactic: “I don’t want to be perceived as a preacher, because I am not. I am just sharing my personal story. And if it touches someone’s heart, and they choose to be inspired and to take action, fabulous. And if not, next. (Laughs).”