What are a few severed limbs lost in the service of dismembering oppressive patriarchal institutions?

I thought Allison Williams had achieved peak ‘crazy’ in Get Out’s denouement, her ponytailed Rose quietly snacking on dry Froot Loops and sipping milk through a straw while searching for her next suitor/victim online to the soundtrack of ‘(I’ve Had) The Time of my Life’. The Perfection sees the actor continue to blaze down a post-Girls psychological horror path, dragging Marnie’s bloodied corpse behind her.

The Perfection sees Allison Williams continue to blaze down a post-Girls psychological horror path, dragging Marnie’s bloodied corpse behind her.

The Perfection’s success rests on the strength of Williams’ portrayal of Charlotte, a former cello prodigy who quit her music training to care for her sick mother. Now an orphaned adult, she reaches out to former mentor Anton and joins him and the staff of his prestigious music academy at a scouting event in Shanghai. It is here she is introduced to Lizzie (Logan Browning, Dear White People), her heiress apparent who went on to achieve the acclaim and fame that eluded her.

The black swan to Charlotte’s lily-white one, the flirtatious Lizzie seduces her and the two forge an unlikely romantic connection. One of the film’s strongest scenes intercuts the pair’s performance of a duet with moments from their tryst, culminating in an orgiastic crescendo. The ensuing pillow talk prompts Lizzie to invite her fellow alumna to accompany her on a two-week, no-frills tour of rural China. This is where the horrors (and, warning: spoilers) start.

Charlotte casually producing a cleaver and telling a delirious Lizzie “You know what you have to do” as bugs envelop her arm, ranks as high in the annals of preludes to filmic amputations as Nicole Kidman beckoning “bring me the anatomy book” in The Beguiled.

A nightmarish bus trip—replete with maggot-filled vomit and other abject horrors—ushers in a searing commentary about the abuse of power in the arts. Using a heady mix of flashbacks, misdirections and religious symbolism, director/co-writer Richard Shepard crafts a taut and darkly entertaining film. While the narrative ploys he uses may not be sophisticated (such as key scenes literally rewinding to reveal another character’s perspective), the film isn’t striving for high art or subtlety. In fact, the viewing pleasure derives largely from the camp-ness of the violent sequences (Charlotte casually producing a cleaver and telling a delirious Lizzie “You know what you have to do” as bugs envelop her arm, ranks as high in the annals of preludes to filmic amputations as Nicole Kidman beckoning “bring me the anatomy book” in The Beguiled).

If you’re not a fan of body horror, nor familiar with rape revenge film tropes, this movie may prove too macabre. For everyone else, what are a few severed limbs lost in the service of dismembering oppressive patriarchal institutions? 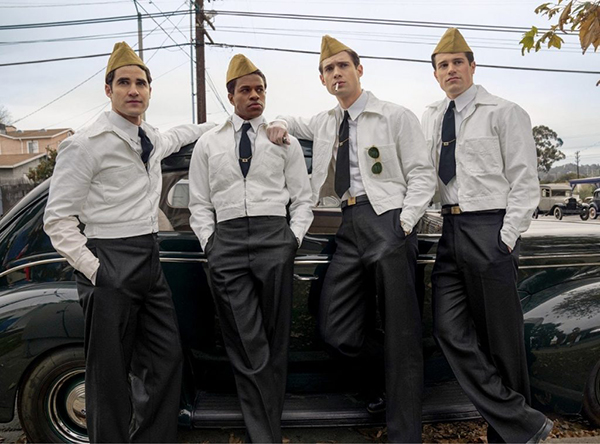 While his latest offers discerning viewers another chance to decry the demise of the Susan Sontag-coined sensibility, the truth is that its corpse had been buried and exhumed long before the producer/writer/director pitched his megachurch on its resting grounds. As filmmaker Bruce LaBruce argues, camp is no longer marked by sophistication and secret signification since queer culture has been co-opted by the mainstream. The result: “…the whole goddamn world is camp.”

The truth is that camp’s corpse had been buried and exhumed long before the producer/writer/director pitched his megachurch on its resting grounds.

Enter Hollywood. The show’s brand of oft-earnest, alt-history wish-fulfilment is highlighted by its opening credits: the diverse main cast helping each other ascend the rafters of the Hollywood sign, led by all-American aspiring actor Jack. He’s flanked by black screenwriter Archie, his actor boyfriend Rock Hudson, self-described “half-Asian” director Raymond, his black actor girlfriend Camille and Claire, the white actor daughter of a studio magnate. They reach the top and marvel at the sun rise over the hills. So far, so subtle.

They’re joined throughout the series by a cast of veterans working in and around the fictional ACE studios. Their paths converge on the production of ‘Peg’: a film based on the true story of an aspiring actor who flung herself off the Hollywood sign in 1932.

While the show features some entertaining subplots involving a gas station-cum-brothel (based on Scotty Bower’s real-life escort ring catering to the glitterati) and a party at queer director George Cukor’s house (with a guestlist boasting Vivien Leigh, Tallulah Bankhead and a cavalcade of naked young men), these excursions dwindle as the series progresses.

What we get instead are characters delivering long, didactic monologues. The most insufferable is director Raymond (played by Murphy acolyte Darren Criss), who declares in the pilot: “Movies don’t just show us how the world is, they show us how the world can be and if we change the way that movies are made, you take a chance and you make a different kind of story, I think you can change the world.”

It’s hard not to see Raymond as a stand-in for Murphy: a wide-eyed creative intent on shifting the narrative on sexism, racism and homophobia. And there is no refuting Murphy’s contribution to culture-making: his shows feature countless LGBTQIA+ characters and storylines; he co-created Pose—a series starring, written, directed and produced by mostly queer and trans people of colour; and has helped elevate trans creatives such as Janet Mock (a co-executive producer here) and Our Lady J up the producorial ranks. His career pays testament to the fact that minority cultural production and expression matter; so why the need for Hollywood to preach?

Murphy’s career pays testament to the fact that minority cultural production and expression matter; so why the need for Hollywood to preach?

It’s the show’s penchant for positive representation that results in an unforgivable lack of nuance. The character of Henry Willson (Jim Parsons delivering a deliciously villainous performance) is a case in point: a Weinstein-esque agent and “star maker” who preys on young men, suddenly and incredulously redeems himself in the show’s finale. A number of other characters meet similarly tidy and boring fates.

For all its virtue-signalling, Hollywood peddles platitudes and delivers a pat happy ending. But with Murphy just two years into a five-year Netflix $300 million contract, there’ll be plenty of opportunities for redemption. Or at the very least, more chances to bitch about his debasement of camp.