Have you ever heard the wolf cry to the blue corn moon? No? Neither has multi-disciplinary Confederated Tribes Grand Ronde artist Anthony Hudson. 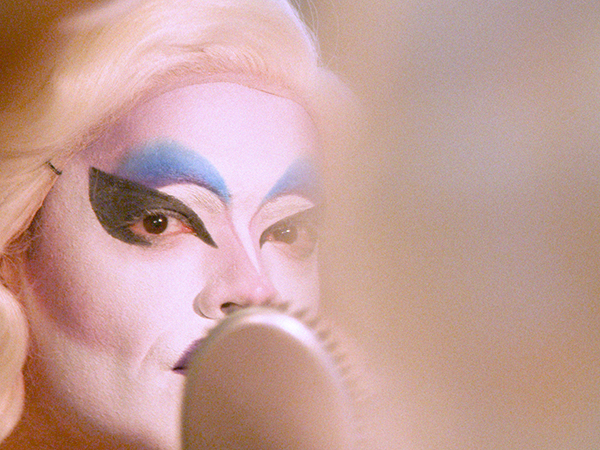 Pocahontas and her florid lunar descriptions are just some of the popular representations of Native American culture that Anthony deconstructs in the solo show Looking For Tiger Lily. Originally conceived for, and performed at, the 2016 Risk/Reward Festival of New Performance in Portland, Anthony reprised the production for the 2019 Yirramboi Festival, the Melbourne-based First Nations arts festival.

The Tiger Lily referenced is Sondra Lee’s blonde, blue-eyed ‘Indian Princess’ featured in the 1960 musical production of Peter Pan. The show uses the titular character as a springboard to explore what it means for a queer mixed First Nations person to experience their heritage through the lens of white normative culture. The production is at turns reflective, funny and melancholy. It transcends traditional autobiography, putting a queer and modern spin on the ancestral traditions of storytelling through song, dance, drag and video.

Q: Looking For Tiger Lily deals with questions of your mixed identity. Is this an important theme across your work?
A: Mixed identity is something that fascinates me because I think it shows that there’s no such thing as ‘purity’. There’s this idea in the United States of blood quantum—Native Americans have to prove our descendancy and lineage to actually qualify as Native Americans… we have to prove our percentage to be able to enrol in a tribe. If I was to have kids through some weird curse or something [laughs], then my kids wouldn’t be able to be enrolled in my tribe because their blood quantum wouldn’t be high enough, even though their grandmother would’ve been tribal whip woman for them. This doesn’t make any sense to me. I think whiteness relies on this idea that there is such a thing as a whole or pure race and that’s not true, it’s a misnomer.

Q: Your show also reflects on the genocide of Native Americans and how you use your art to stymie it. Can you elaborate on that?
A: My show is about coming to consciousness. I grew up without traditions for a whole bunch of reasons. My grandmother would come over and share stories with me and I would learn some basic traditions through her, but otherwise I was off on my own. As I got older, I started to understand my identity and really embrace nativeness—especially seeing that nativeness was so much more accepting of queerness than the white world that I was existing in and the Catholicism that I was raised in.

I found that I could re-appropriate the terms of our traditions, even if it wasn’t traditional in the most traditional sense. I don’t know how to drum or dance or bead or weave, but what I’ve discovered is that I do know how to clown. So telling this story by looping in video and song and dance and standup comedy and personal storytelling—that’s my way of putting a queer spin on my ancestral traditions and keeping that oral tradition alive.

Q: Are there any First Nations queers or queens that have influenced you?
A: One of my favourite First Nations queens is from San Francisco and her name is Landa Lakes. I love Landa so much—her looks are amazing, and she does a great Pennywise from IT. I also love that name—Landa Lakes, after the butter.

I also just performed at the Talking Stick Festival in Vancouver, BC and it’s an all-indigenous First Nations festival. It was so inspiring to get to go and be there with First Nations people from Canada and watching fancy dancing happening and watching dancers perform dances of male dancers as well as female dancers but as queer people, shifting which role they played and shifting their regalia and appropriating both sides—it was incredible to me.

It’s really amazing seeing what Two-Spirits are doing. Two-Spirit is the pan-Indian term for gender-variant people across countless tribes. But seeing how we’re able to use this now and to bring our queerness back into our traditions, and vice versa, and watching people do things from drag at pow wows to whole Two-Spirit pow wows. It’s just wild and so inspiring to see us all reclaiming our traditions and also reasserting our personhood.

Q: Why do you opt for the description of drag clown over drag queen when describing your alter ego Carla Rossi?
A: I prefer the term ‘drag clown’ instead of ‘drag queen’ because I’m not trying to emulate ‘woman’, whatever that is. I’m less interested in drag that’s about appropriating these cues of high femininity and I’m more about confusing and hacking the signals of gender.

I think gender is a language, it’s something that we step into, that we walk into, that we wear. And when I do drag, I want people to be as confused looking at Carla as I am about myself.

Q: When you perform as Carla, you don white face. What’s the reason behind this?
A: I started out doing drag when a friend asked me if I wanted to go to a drag party. We both put on pillow cases and had white face paint on because I’d just done a zombie film. After a while it just kind of took. I kept doing it and more and more people would ask us back to do shows and then I realised that this could be a way for me to perform and talk about everything that I was interested in.

I’d always wanted to be a writer, an actor, a comedian, a director… and Carla was a way for me to be all of that. As I brought her into art school, I realised that the white face, this kind of clown mask, was a way that I could talk about being mixed race, and I could talk about wearing white face almost as a critical inversion of black face, where I’m able to negotiate the whiteness that people put on me as a white-passing native person and as someone who is half-German and also half-Indigenous. So I was able to use her to navigate and to mock and to lampoon and to wear all of this whiteness, all of this gender confusion and everything that had been put on me by society.

Q: You co-host a queer horror podcast. Could you tell us about that?
A: Gaylords of Darkness is my podcast with Stacey Ponder. It is one of my very favourite things to do besides running my Queer Horror series in Portland, Oregon which is the only ongoing exclusively LGBTQIA+ horror screening series in the United States.

With Gaylords, I get to spend every week just as myself, not in clown face, behind a computer sitting at a microphone talking to a great friend about horror movies. We look at the silliest movies from Lurkers and The Sentinel to Meg Tilly in One Dark Night or the entire Child’s Play series, which is my personal favourite. There is nothing queerer on this earth than the Child’s Play franchise, I promise you.

I love Cabaret. It really shifted my life as a teenager because when I saw this musical, it was so unlike anything else I’d ever seen. I’d been growing up with Disney movies which are also a deep gay root for me. I mean every Disney villain is a drag queen, even Jafar.

But being able to see Cabaret and see this total shift from the Rogers and Hammerstein kind of vibe was mind-blowing. There are abortions, there’s homosexuality, there are Nazis, there’s Liza Minnelli—a true queer icon; it melted my mind. And I saw that you could use musicals to be funny and to be incisive and to be dark and to talk about politics and to really rope people in. So it went from Cabaret to Chicago, and Hedwig and the Angry Inch and now I’m obsessed with The Cher Show about my all-time favourite diva.

Q: Finally, what is the blue corn moon that Pocahontas sings about?
A: Time and again, the elders and the children have asked: “What the fuck is a blue corn moon?” I have no idea what a blue corn moon is. Why don’t you join me on my change.org petition to dethaw the severed head of Walt Disney to ask him personally: “What were you talking about in Pocahontas?” I would love the answer.