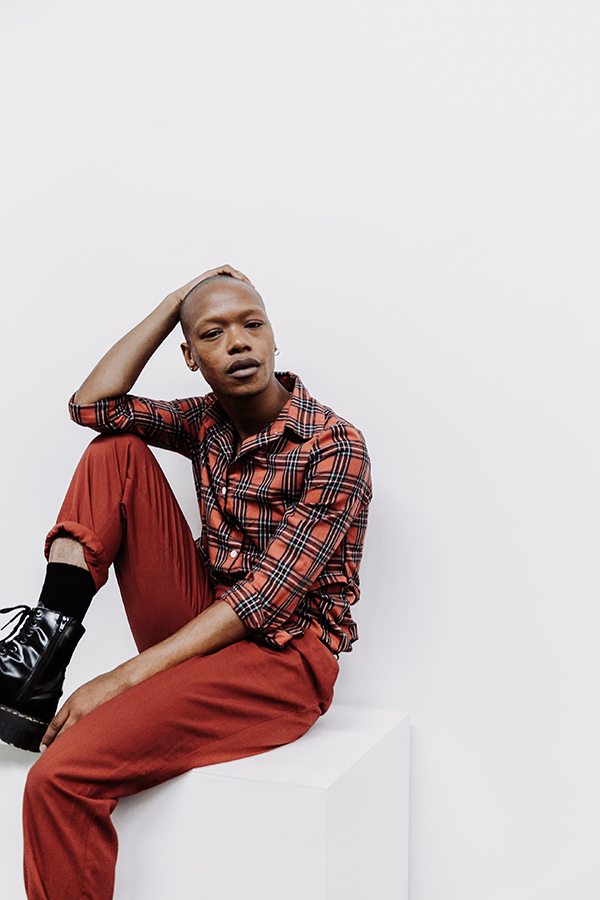 The 32-year-old, London-based musician, actor and novelist should know: “I grew up around choirs. My mum and aunts all sang in choirs.” Raised in Port Elizabeth, “a [South African] metropolis that’s not given its dues”, Nakhane was a devout Christian and active in church life until his mid-twenties.

Though his religious devotion has waned, his love for sacred music hasn’t. “I love hymns. There’s this sense of finality about them. [They’re] not art for art’s sake. They were written because this person really needed to write this music.”

Nakhane explains that his sophomore album You Will Not Die‘s initial mantra was ‘hymns for the lost, hymns for the apostate’. The album explores his struggle to reconcile his faith with his desires. When he was writing the songs he wanted to imbue them with the feeling of sacred music, but with an autobiographical twist. “When I wrote the song ‘Teen Prayer’, I knew I couldn’t write a straight up hymn because I wasn’t that person anymore, I wasn’t Christian… I had to have a version of who I was at the time, and that version was queer.”

“I don’t feel the burden of being a role model. If my visibility is for anything, it’s for someone else to be allowed to be themselves.”

The tension between tradition and queer desire is a prevalent theme across the artist’s oeuvre, including his role in 2017’s The Wound. The film centres around the sacred initiation of a group of Xhosa teenage boys into manhood, which includes ritual circumcision and a series of endurance tests in the wilderness. Nakhane portrays Xolani, a repressed factory worker that serves as a mentor to the boys while hiding his sexual relationship with a fellow male leader.

The film’s director and co-writer John Trengove initially asked the artist to write the music for the film. After they met for a coffee to discuss the project, Trengove asked him to audition for a supporting role, and eventually altered the story and offered him the lead. “To ready myself for the role, I went to all the spaces I promised myself that I’d never go to again—shebeens, taverns, places where men drink. And I’d watch all these men, watch how they sat, how they drank, how they smoked.” These excursions into ‘hyper-masculine spaces’ helped him prepare to embody Xolani, a sullen character who seems worlds apart from the cheerful multi-disciplinary artist. “On some level I do relate to him. Not myself now, but myself a few years ago when I was fighting my desires and fighting my identity. I understand that self-hatred.”

But mining the recesses of his past was only part of the challenge of the role. When the film was released in its native South Africa, it sparked controversy and was originally granted an X18 rating usually reserved for hardcore pornography. Nakhane, along with other members of the crew and cast, even received death threats.

“The response to the film was extreme for a number of reasons. One—the film is about a secret and sacred rite of passage… people were outraged because we’d made a film about it and they assumed that the film was some sort of exposé.” He clarifies: “This was not a documentary. This was a fictive story less to do with initiation than with a tragic love story.”

“Two—was the fact that it had queered this space that is supposed to be emblematic of ‘manhood’.” He elaborates: “[In this culture] queer people are seen as a germ or virus, something that is there but everyone wishes wasn’t. And in this film they take centre stage, and they don’t only exist but they exist loudly.”

This amplification proved to be a double-edged sword. In addition to the fiery backlash, the film garnered a lot of support from South Africa’s black feminist and queer communities and international audiences.

“I wanted to be George Michael, without the backlash and toilet sex.”

Among the movie’s plethora of fans was director-performer John Cameron Mitchell. Nakhane and his partner were having lunch at a friend’s house and discussing Mitchell’s 2006 film Shortbus, when Mitchell DM’d him on Instagram: “At first I didn’t think it was the real John Cameron Mitchell, I thought it was Apple listening to our conversation.” The director expressed his admiration for Nakhane’s work and invited him to New York to record an episode for his musical narrative podcast Anthem: Homunculus, featuring such luminaries as Glenn Close, Laurie Anderson and Patti LuPone.

Originally conceived as a TV sequel to Hedwig and the Angry Inch, the project evolved into a ten-episode podcast series about a sardonic shut-in, Ceann Mackay, who launches the world’s first online telethon to crowdfund for his brain tumour treatment. Nakhane plays his fiercely independent lover Jairo, a young man who “struggles with a host of demons”.

“At first I didn’t think it was the real John Cameron Mitchell, I thought it was Apple listening to our conversation.”

Apple, if you are spying: Nakhane is keen to work with Hong Kong director Wong Kar-wai. “I think he’s a genius, I’ve stolen from him for years and I shall continue to steal from him.” His music video for ‘Clairvoyant’ pays homage to Kar-wai’s Happy Together, with the singer and a co-star taking on the roles of turbulent lovers played by Tony Leung and Leslie Cheung. “Wong Kar-wai’s films are so aesthetically pleasing that sometimes you have to rewatch them to really understand how beautiful the stories are, how beautifully lit they are, how gorgeous the framing is. Happy Together is almost like the messier sibling to In the Mood For Love. It’s much more interesting to me because it’s over-saturated, it’s queer, and it’s funny.”

While Nakhane is clearly well-versed in queer culture, this wasn’t always the case: “Growing up I didn’t have much access to it, because I didn’t know what it was. I left Port Elizabeth when I was 15 and this was the time that I was starting to understand my desires.” It’s at that formative age that he became obsessed with pop star George Michael. “I wanted to be George Michael, without the backlash and toilet sex”, he quips.

While he’s weathered his share of fallout, Nakhane has transformed into an artist with his own dedicated following. Given his experiences with The Wound, you’d expect him to feel reticent about the attention, but that isn’t the case: “I don’t feel the burden of representation. I don’t feel the burden of being a role model. If my visibility is for anything, it’s for someone else to be allowed to be themselves.”